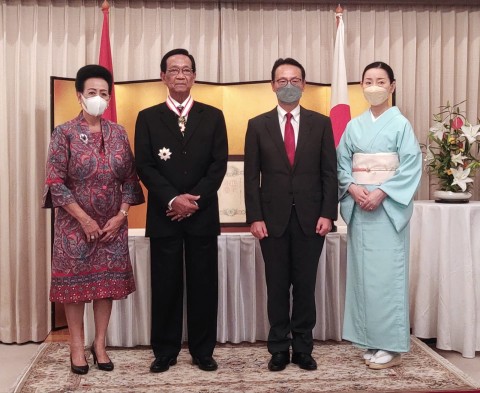 The friendship cooperation between Japan and Indonesia has existed since quite a long time. (Photo: Japan Embassy Jakarta)
Yogyakarta: Governor of Yogyakarta Special Province Sri Sultan Hamengku Buwono X received "The Order of Rising Sun, Gold and Silver Star" from Japanese Emperor Naruhito for his meritorious services in forging friendship between Indonesia and Japan.

Japanese Ambassador to Indonesia Kanasugi Kenji conferred the medal of merit on Sri Sultan at his official residence in South Jakarta on Tuesday night, the Yogyakarta provincial government noted in a written statement.
BERITA TERKAIT

Sri Sultan has also contributed significantly to promoting cooperation and cultural exchange between Indonesia and Japan.

"We hope the medal of merit would better increase relations and interactions between the people of Japan and Indonesia in harmony with mutual understanding between the two countries," Sri Sultan stated.

"The sister province cooperation with Kyoto Prefecture has been established since 1985. It is the first and longest cooperation between regional governments in Indonesia and other countries," he pointed out.

As a result of the cooperation, various innovations have been made in the fields of art, culture, education, science, technology, tourism, and industry, he stated.

The two regional governments planned to commemorate 35 years of cooperation through various activities, including sending Yogyakarta students to Kyoto in 2020. However, the activities were suspended due to the COVID-19 pandemic, he remarked.


Meanwhile, cooperation between Yogyakarta and Yamanashi was established in 2016.

Sri Sultan also expressed gratitude to JICA for its initial assessment assistance for the aerotropolis area of the Yogyakarta International Airport.

The assistance also included J-CLAIR's role in facilitating communication between the Yogyakarta provincial government and relevant stakeholders in Japan.

He also lauded the Sumitomo Forestry for having rehabilitated the Paliyan Wildlife Reserve in Gunungkidul District since 2015 as part of the efforts to conserve the forests and ecosystem.