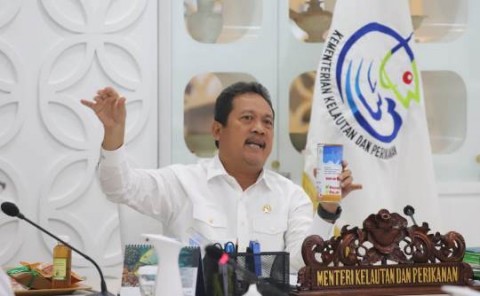 The command center will supervise activities in the Indonesian waters to be divided into six zones, with the Maluku waters being zone 3, Maritime Affairs and Fisheries Minister Sakti Wahyu Trenggono stated in the South Sulawesi provincial capital of Makassar on Sunday.
BERITA TERKAIT

"We will use a satellite to supervise (the waters) round the clock to prevent illegal fishing. To that end, we will set up a command center at the Office of the Maluku Governor to function as a control center, particularly for zone 3," he remarked.

The satellite will conduct an aerial, round-the-clock supervision of fishing ships in the zone, he remarked while adding that such supervision was common to the rest of the world.

The command center will be able to check the quantity of fish caught by fishing ships from the Indonesian waters as well as to monitor their fishing permits, he stated.

"If it turns out that (the quantity of fish caught) surpasses the permissible limit, then the ships will be seized. We happen to have troops (for this purpose)," he remarked.

All ships conducting surveillance operations will be connected to the command center at the Office of the Maluku governor, he noted.

Trenggono affirmed that the potential for fish output in zone 3 reaches 3.9 million tons, with a production value of Rp117 trillion.

In view of the huge potential for fish output, the Maritime Affairs and Fisheries Ministry has allocated fish quotas for investors and local fishermen, he stated.

The fish quotas for investors and local fishermen respectively reach 2.8 million tons and 268,800 tons per year, he revealed.