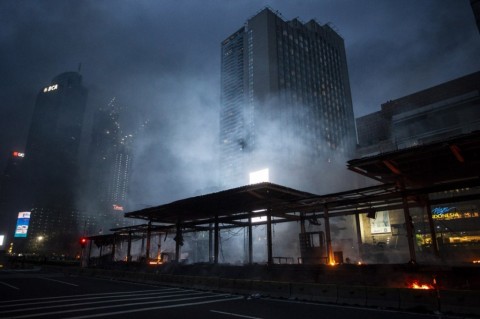 Labor unions and activitists have been conducting protests to oppose the Job Creation Law since Monday. (Photo:Antara/Dhemas Reviyanto)
Jakarta: As many as 20 TransJakarta bus stops were damaged during demonstrations against newly passed Job Creation Bill across Jakarta Special Capital Region on Thursday.

Protests flared up in Jakarta and other regions in Indonesia after the Indonesian House of Representatives (DPR) passed the controverial Omnibus Bill on Job Creation into law.

"God willing, we will complete the reviewing process this afternoon," the former education minister stated.

Labor unions and activitists have been conducting protests to oppose the Job Creation Law since Monday. They demand the central government to immediately revoke the law.

According to them, the law will harm the livelihoods of many workers in the country. In addition, it will also put Indonesia's environment and social protections at risk.