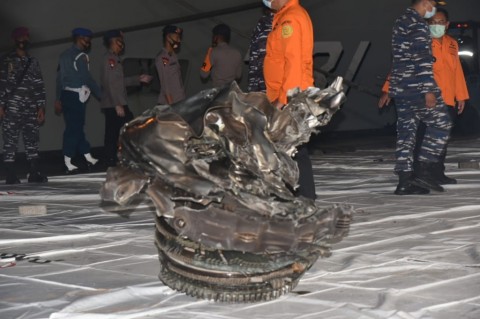 A piece of engine of Sriwijaya Air Sj182
Jakarta: Transportation Minister Budi Karya Sumadi has said that a joint team will try to retrieve parts of the fuselage of Sriwijaya Air Flight SJ-182 from the seabed.

"The joint team is planning to retrieve parts of the fuselage by using crane vessels," the minister wrote on his instagram page on Monday morning.
BERITA TERKAIT

On Saturday afternoon, the Sriwijaya Air flight went missing en route from Jakarta to Pontianak on the island of Borneo. The Boeing 737-524 aircraft disappeared from radar screens shortly after takeoff from the Soekarno-Hatta International Airport. The airplane reportedly plunged into a steep dive and crashed into waters off Jakarta.

According to reports, the passenger plane carried 62 people on board, including 12 crew.

On Sunday, the joint team detected the possible signal from the black box between the island of Laki and Lancang in Seribu Islands Regency. Divers also found debris and body parts in the area. The body parts were then taken to the disaster victim identification (DVI) command post.

"I offer my condolences to families of passengers and crew of Sriwijaya Air SJ-182 flight," the minister stated.