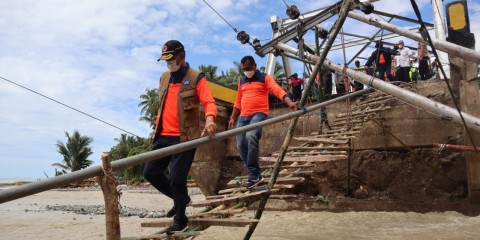 
Based on data collected by the BNPB, the death toll from flash floods in Alor Regency has reached 21, while 20 people are still missing.

During the visit, the BNPB leader and his entourage were accompanied by NTT Deputi Governor Josef Nae Soi and Alor Regent Amon Djobo.

Previously, the Meteorology, Climatology, and Geophysics Agency (BMKG) forecasted that after April 7, the weather in Southeastern Indonesia, affected by Tropical Cyclone Seroja, the strongest tropical cyclone the country has seen in a decade, will improve.

"The weather will improve because the cyclone is moving farther away," Head of the BMKG Dwikorita Kurniawati said after a limited meeting on Disaster Management in the Provinces of West Nusa Tenggara (NTB) and East Nusa Tenggara (NTT) on Tuesday.

However, before that, heavy rain accompanied by lightning and strong winds can still potentially occur.