Bali's Ngurah Rai Airport Halts Flights to and from China 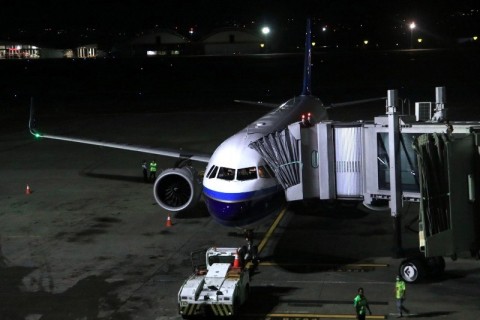 China Southern with flight number CZ625 became the last flight from China to arrive in Bali. Photo: Antara
Denpasar: I Gusti Ngurah Rai International Airport, Bali, suspended flight operations to and from China. The flight suspensions is following up on the central government's instructions.

"Yesterday we held a meeting with the member agencies of the Airport Community, including airlines serving international routes. We officially suspended the flight operations of routes to and from China Wednesday, February 5, 2020, at 00.00 Central Indonesia Time (WITA)," said General Manager of PT  Angkasa Pura I I Gusti Ngurah Rai Airport, Herry Sikado.
BERITA TERKAIT

"We have coordinated with airlines, ground handling, immigration and other agencies related to this matter," Herry continued.

According to Herry, China Southern flight route Guangzhou (CAN) -Bali (DPS) with flight number CZ625 became the last flight from China to arrive in Bali.  This flight arrived at Tuesday, February 4, at 22.55 WITA.

"The last flight to China that we served was from the airline China Southern CZ626 to Guangzhou. Departing Wednesday morning, February 5, 2020, at 00:18 WITA," he explained.

For passengers to China that are affected by flight stoppages, Ngurah Rai Airport has opened a helpdesk located on the 2nd Floor of the International Terminal.

"Officers from airlines, ground handling, and from Angkasa Pura I will stand by to help affected passengers," he concluded.