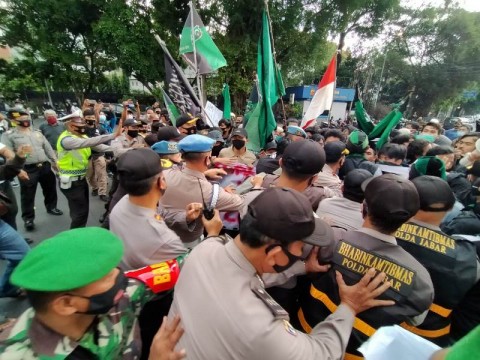 The Omnibus Bill of Job Creation was passed into law on Monday (Photo:Medcom.id)
Bogor: Dozens of college students today held a demonstration in front of the Bogor Palace, Bogor City, West Java Province to protest the newly passed Omnibus Bill on Job Creation.

"We reject the new law and demand the government to revoke the new law," one of the protesters, Sofwan, told reporters here on Wednesday.
BERITA TERKAIT

"The government and parliament must focus on handling covid-19 handling not bringing foreign investors and workers," the Muslim Students Association (HMI) member stated.

On Monday evening, except for the Democratic Party and the Prosperous Justice Party (PKS), all parties agreed to pass the Job Creation Bill into law.

However, the newly passed bill is strongly opposed by labor unions and activists. According to them, it will harm the livelihoods of many workers in the country. Since Monday, they have been conducting protests in many regions in Indonesia.

"We will hold more protests. We will bring more people. Hoepefully President Joko Widodo (Jokowi) wants to listen to our demand," he stated.