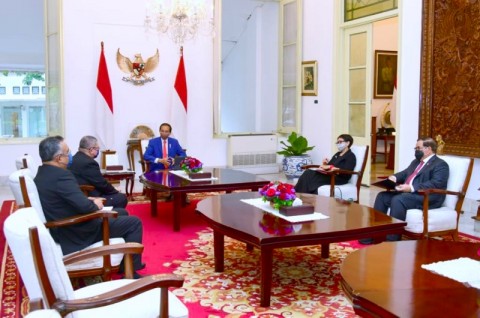 Jakarta: President Joko Widodo received a courtesy call from the Malaysian Foreign Minister, Saifuddin Abdullah at the Merdeka Palace on Monday, October 18, 2021. During the meeting, Jokowi conveyed that relations between Malaysia and Indonesia must continue to be improved.

"Indonesia and Malaysia will be able to continue to increase cooperation. Not only for our bilateral interests, but also for regional peace and prosperity," President Jokowi said in his statement.
BERITA TERKAIT


After the meeting, Foreign Minister Retno Marsudi who was also present to accompany the President said Malaysian Prime Minister Ismail Sabri Yaakob planned a visit to Indonesia in November.

President Jokowi, said Retno, welcomed the planned arrival of PM Sabri. The visit shows the strong relationship between the two countries and will be used to discuss not only bilateral relations but also regional and global issues.

The President also said that both countries need to start preparing for safe travel, including for business people, of course, by continuing to pay attention to health factors and the condition of covid-19 pandemic.

President Jokowi reiterated the importance of the issue of protecting Indonesian citizens in Malaysia and will continue to pay attention to the issue.

"The president hopes that cooperation for this protection will be further strengthened," he added.