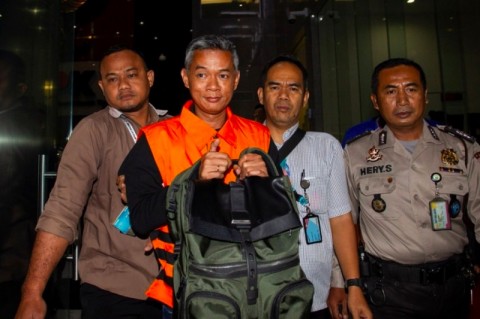 "In the near future I will resign as a member of the KPU. Please pray that I will be given health and patience," Wahyu said in an open letter at the KPK Building, South Jakarta, Jakarta on Friday, January 10, 2020.

He apologized to his colleagues at the KPU for the case that ensnared him. He claimed the problem that happened to him is of a personal nature.

"And I respect the legal process being carried out by the KPK," he said.

Wahyu became a suspect after being exposed by the KPK's sting operation (OTT) on Wednesday, January 8, 2020. He was allegedly taking bribes to seek interim replacement (PAW) of legislative candidates from the Indonesian Democratic Party of Struggle (PDI-P) in the constituency (Dapil) of South Sumatra Harun Masiku.

In the OTT at Soekarno Hatta Airport, Tangerang, Banten, the KPK confiscated IDR 400 million in Singapore dollars. Previously, Wahyu was also suspected to have received a bribe of IDR 200 million.

The KPK has named four suspects in the case. Wahyu Setiawan and his confidant and former member of the Election Oversight Body (Bawaslu), Agustiani Tio Fridelina, became suspects of receiving bribes.

PDI-P cadre Harun Masiku and private parties, Saeful, are suspected of giving bribes. Saeful is suspected to be a staff member at the Central Board of the PDI-P.

Acting KPK Spokesman Ali Fikri said that only Harun Masiku had not been detained by the KPK. KPK asked Harun to surrender immediately. Meanwhile, three other suspects are in KPK custody in their detention center.