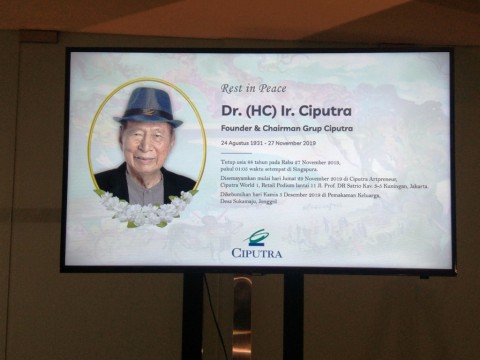 According to Medcom.id reporter, in the Ciputra Artpreneur area, Thursday, November 28, 2019, there have been many floral arrangements from state officials and Ciputra’s colleagues.
BERITA TERKAIT

Based on the information received by Medcom.id, the wake will be started from Friday, November 29, 2019, at Ciputra Artpreneur, Ciputra World 1 in Kuningan, Jakarta. In the meantime, the funeral will be held on Thursday, December 5, 2019.

The chairman and founder of the Ciputra Group passed away at the age of 88 on Wednesday, November 27 at 01.05 Singapore time.