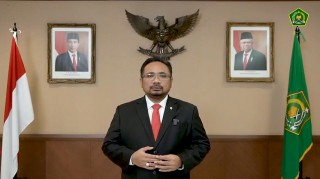 According to a press release here on Monday, the inauguration was marked by the unveiling of a red cover by the ministry's special staff for media and public communication, Wibowo Prasetyo, and Chairman of the Dharma Jaya Toasebio Temple Foundation, Arifin Tanzil, on Saturday.
BERITA TERKAIT

Religious Affairs Minister Yaqut Cholil Qoumas signed the inscription earlier on May 12, 2022, at the ministry's office in Central Jakarta.

Prasetyo said the inscription can educate subsequent generations to remember the good service and will of the ancestors and honor the foundation founders for their dedication.

"The highest honor to the nine founders who founded the Dharma Jaya Toasebio Temple Foundation in 1983, which develops until now," Prasetyo affirmed.

Furthermore, Prasetyo said this inscription can remind people of the importance of historical understanding and awareness that will be passed on to the next generation.

Meanwhile, Chairman Tanzil spoke at length about the history of the foundation and its function to Buddhists. Tanzil said his grandfather granted a part of land of the temple to the foundation.

"Now, the land that was granted fully belongs to the foundation," Tanzil stated.

The temple was burned down by the Dutch East Indies government over links to an individual in the tragedy of Angke River and the Batavia massacre.

The temple was then rebuilt in 1751, and in 1754, the temple became a place for Chinese people living in Batavia.

In the framework of providing a clarification of history to public and foreign tourists, a historical inscription of the temple was made, as cited from the release.