Jokowi Hinted that Sandiaga is a Strong Candidate for 2024 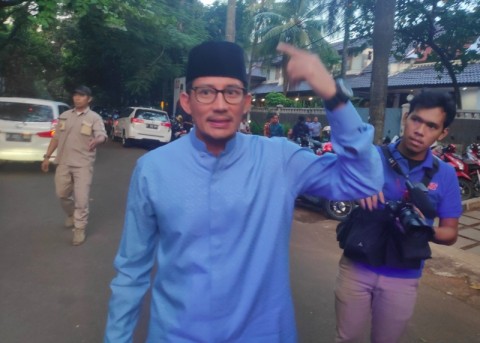 the former HIPMI chairmen, Sandiaga Uno. Photo: Medcom.id/M Sholahadhin Azhar
Jakarta: President Joko ‘Jokowi’ Widodo hinted that former Chairman of the Young Indonesian Entrepreneurs Association (HIPMI) Sandiaga Uno will run for President in 2024. This was conveyed by Jokowi while attending the inauguration of the 2019-2022 HIPMI board at Raffles Hotel, Jakarta on Wednesday, January 15, 2020.

"Be careful, 2024, someone who is present here is a candidate who will most likely replace me," Jokowi said.

Jokowi did not mention the name in question. However, he admitted that of all the former HIPMI chairmen present he only knew Sandiaga Uno.

"I believe that but I did not mention the person who was just standing there just now," Jokowi said after greeting Sandi.

The inauguration ceremony for HIPMI officials was attended by state officials ranging from the leadership of the People’s Consultative Assembly (MPR) to the ministers. HIPMI administrators and former HIPMI chairpersons were present one of them being, Sandiaga Uno.

The Head of the Investment Coordinating Board (BKPM) Bahlil Lahadalia also briefly mentioned Sandiaga's participation in the presidential election. He said, Sandi would run again.

"Pak Sandi actually already knows that if (Jokowi) wins, he (Sandi) said to me instead of seeing other people compete why not see one from the HIPMI extended family," Bahlil explained.