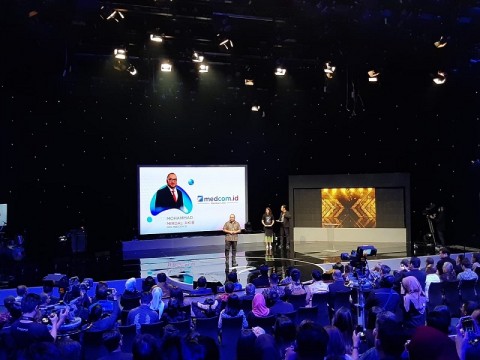 The awards were given directly by Media Group and Medcom.id officials. (Medcom.id/Photo: Sri Yanti)
Jakarta: Medcom.id awards three prominent figures and two well-known brands in Indonesia. All five are considered influential in providing meaning and inspiration to the people of Indonesia.

The awards were conferred along with Medcom.id's 2nd Anniversary celebration entitled 'Giving Meaning'. The awards were given directly by Media Group and Medcom.id officials.
BERITA TERKAIT

The first award was given to PT Asuransi Jiwa Manulife Indonesia as The Most Engaging Brand on Social Media. The award was given directly by Medcom.id President Commissioner Reino Barack.

Then PT Kalbe Farma Tbk (Kalbe) received an award as The Most Innovative Health Brand. The award was given directly by Medcom.id CEO & Media Group News Mohammad Mirdal Akib.

Furthermore, Director Joko Anwar was awarded the Most Impactful Movie Director award. Joko was thankful for the award.

The award is believed to motivate the world of Indonesian filmmaking. Not to forget, his films will continue to uphold Indonesia's diverse values.

The Most Wanted Video award on the Medcom.id’s YouTube channel was given to Law Expert Yusril Ihza Mahendra. In Medcom.id’s Newsmaker talk show titled 'Yusril Talks Bluntly About Jokowi and Prabowo', the number of views has reached 2.3 million viewers.

"I consider it a very big honor to receive this award," Yusril said.

Finally, the Minister of Public Works and Public Housing (PUPR) Basuki Hadimuljono was awarded the Most Rock and Roll Minister award. The 'eccentric' but serious figure has brought success in the field of PUPR.

Deputy Minister of PUPR John Wempi Wetipo who represented Basuki expressed his gratitude to Medcom.id for the award. The award will be a motivation to continue to work together to develop and educate Indonesia.

"We, on behalf of Pak Basuki, wish a happy birthday to Medcom.id and to their success and progress," said Wempi.