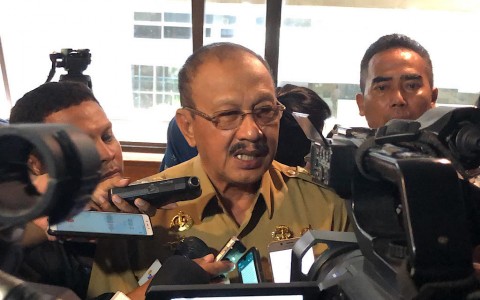 Natuna Regent Abdul Hamid Rizal (Photo:Medcom.id/Theofilus Ifan Sucipto)
Jakarta: The Natuna Regency administration has formed a team to calm down the community relating to the quarantine of Indonesian citizens (WNI) who returned from Wuhan, China.

"To socialize the information so that people are not too worried," said Natuna Regent Abdul Hamid Rizal at the Coordinating Ministry for Politics, Law and Security, Central Jakarta on Tuesday, 4 February 2020.
BERITA TERKAIT

Hamid said the local residents were worried because of the sudden decision. The Natuna residents also have never experienced a situation like this.

Hamid and a number of figures from Natuna met with the Coordinating Minister for Politics, Law and Security Mahfud MD to exchange ideas and get directions about the issue. The meeting was also attended by Minister of Home Affairs Tito Karnavian and Minister of Health Terawan Agus Putranto.

The World Health Organization (WHO) recently named the coronavirus outbreak a global health emergency. The number of deaths jumped to 425 people as of Tuesday, February 4, 2020.

The virus have been found up in at least 25 countries. A number of countries have flocked to evacuate their citizens from Wuhan, Hubei where the virus was first detected.

A total of 238 Indonesian citizens have been evacuated from Hubei province. They are currently undergoing a period of observation for 14 days in Natuna, Riau Islands.