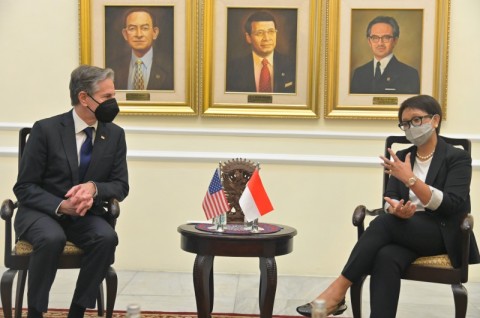 Foreign Minister Retno Marsudi said that there were four priorities for cooperation in the ASEAN Outlook on the Indo-Pacific.
BERITA TERKAIT


"It is time for ASEAN members to implement these four collaborations together with external partners in an inclusive manner," said Retno in a joint statement with Blinken at the Ministry of Foreign Affairs, Tuesday, December 14, 2021.

The cooperation, said Retno, could be beneficial and would contribute to mutual support and peace in the Indo-Pacific.

"Indonesia hopes that the US will become a concrete partner in implementing the ASEAN Outlook on the Indo-Pacific," he continued.

In a public lecture at the Universitas Indonesia this morning, Blinken explained the US vision of the Indo-Pacific. He said it was the fastest growing area on the planet. Economies in the Indo-Pacific account for 60 percent of the world's economy and have benefited from two-thirds growth over the past 5 years.

"Our vision for the region is centered on five core elements that many countries and peoples in the Indo-Pacific share," he said.

These elements, among others, promote a free and open Indo-Pacific. Then the US will forge stronger connections inside and outside the region.

United State also wants to promote broad-based prosperity. Not only that, they will also help build a more resilient Indo-Pacific.

And the last visit, the US will enhance the security of the Indo-Pacific. The reason is that threats continue to grow in this area, so security is very important.

"To do so, we will rely on our greatest strength: our alliances and partnerships," he explained.