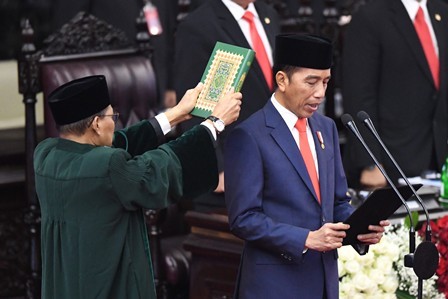 "I swear by Allah to fulfill the duties of president of the Republic of Indonesia to the best of my capabilities and in the fairest way possible, to uphold the Constitution by all means and to execute all laws and regulations as straightforwardly as possible as well as to dedicate myself to the service of the Nation and the People," President Jokowi read the text of the Oath of Office.

After taking the Oath of Office, President Jokowi and Vice President Ma'ruf signed the document.