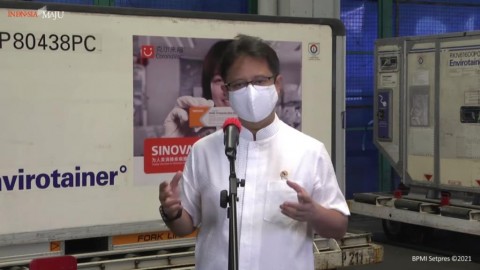 "The first time we identified (the Omicron variant of COVID-19) in Indonesia was in mid-December (last year) and the number of cases started to rise in early January. In 35-65 days, there will be a relatively high number of transmissions. We must be ready," Budi said after a limited cabinet meeting on Sunday, as quoted from the Cabinet Secretariat's website.
BERITA TERKAIT

He stated that the public should remain vigilant and not panic.

According to Budi, hospital admission for Omicron patients in several countries ranges from 30 to 40 percent compared to the hospitalization of that of the Delta variant.

The Minister also said that the Government continues to closely monitor the condition of Omicron confirmed patients who require hospital treatment. Of the approximately 500 cases of Omicron, 300 of them have been recovered.

The Government, he added, will also impose stricter enforcement of health protocols supported by the utilization of PeduliLindungi app.

The Minister went on to say that the Government will also step up COVID-19 booster vaccination rollout and ensure supply of medicine needed by COVID-19 patients.