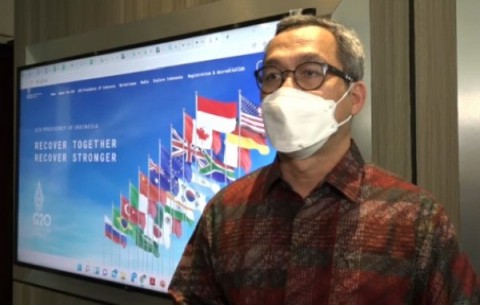 "This is a very important momentum because Indonesia is the first developing country to hold the G20 Presidency. We hope that Media Group has the same enthusiasm and communicate it to the public," said Director General of Information and Public Communication of the Ministry, Usman Kansong, during a visit to Media Group here on Thursday, January 13, 2022.

Usman wants media to help promote Indonesia's efforts to enhance cooperation to recover the world in the midst of the COVID-19 pandemic.
BERITA TERKAIT

As a representative of developing countries, he said, Indonesia hopes that the G20 could create stronger cooperation between countries.

Meanwhile, Usman added, the issue of digital transformation refers to the current state of the global economy which is moving towards digital era.

According to Usman, his ministry will oversee this issue throughout Indonesia's G20 Presidency this year.

He also explained that the issue of green energy transition refers to the shift from fossil energy to new and renewable energy.

Moreover, Usman said, Indonesia's G20 presidency is expected to have a positive impact on the community by improving the tourism sector and Indonesian economy.

"This G20 presidency will boost the economy. MSMEs will be involved. This will definitely bring benefits directly or indirectly to the people of Indonesia," he said. (Gadis Bianca/Metro TV)