New Capital Draft Bill to be Handed Over Next Week 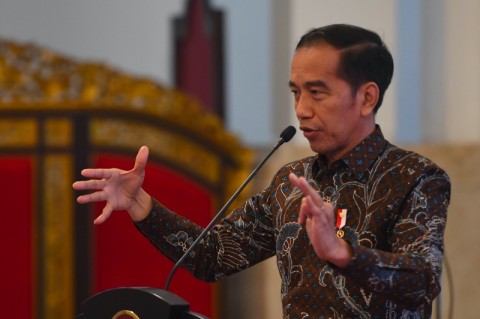 President Joko Widodo. Photo: Antara
Jakarta: President Joko ‘Jokowi’ Widodo ensured that the draft bill (RUU) on the new capital has been completed. The draft will be sent to the House of Representatives (DPR) simultaneously with the submission of the omnibus law draft, next week.

"The draft bill on the new capital city has been completed. Next week I hope, God willing, we submit it to the House of Representatives," Jokowi said during a dialogue with reporters at the Merdeka Palace, Jakarta on Friday, October 17, 2020.

However, Jokowi said, that could still change. The reason is the position of the new capital administration will still be discussed further in the DPR.

"Certainly not like the organizations that are already here. It means that it is an administrative city," he said.

Jokowi claimed that he was still looking for someone who would lead the authority. The former mayor of Solo said that the candidate for the head of the authority must understand global financial problems, urban planning, and have an international network.

The government will move the capital to parts of North Penajam Paser Regency and in parts of Kutai Kartanegara Regency, East Kalimantan.

The location contour of the new capital city is hilly because it is a former industrial forest with an area of 256 thousand hectares with a core area of 56 thousand hectares. Later the new capital city will be divided into a number of clusters namely government clusters covering an area of 5,600 hectares, health clusters, education clusters, and research and technology clusters.

The process of developing this new capital city will require at least Rp466 trillion in funds. Of that amount, the portion of the APBN reached Rp89.4 trillion or 19.2 percent. The rest, relying on Public Private Partnerships (KPBU) at Rp252.4 trillion or 54.5 percent, the private sector including BUMN at Rp123.2 trillion or 26.4 percent.