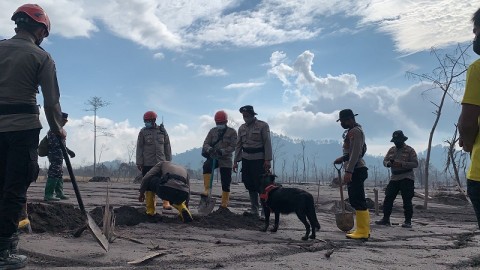 The mountain is one of the country’s most active volcanoes and the tallest one in Java.
Jakarta: Joint personnel continue to carry out search and rescue efforts as the death toll from Saturday's eruption of Mount Semeru volcano has reached 43.

"As of 12.00 local time, the number of victims who died from the eruption of Mount Semeru increased by four people, bringing the total to 43 people," said Acting Head of the Disaster Data, Information and Communication Center of the National Disaster Mitigation Agency (BNPB) Abdul Muhari said in a statement on Thursday afternoon.

Furthermore, the number of injured victims stood at 104 as of Thursday noon.

During the visit, the President said he wanted to make sure that all resources have been mobilized to manage the disaster impacts.

During the inspection, the Head of State also visited an evacuation shelter located in Sumberwuluh village where he greeted evacuees and gave aids to relatives of the victims who died in the eruption.

The President also inspected soup kitchens and health care posts in the regency.

The mountain is one of the country’s most active volcanoes and the tallest one in Java.