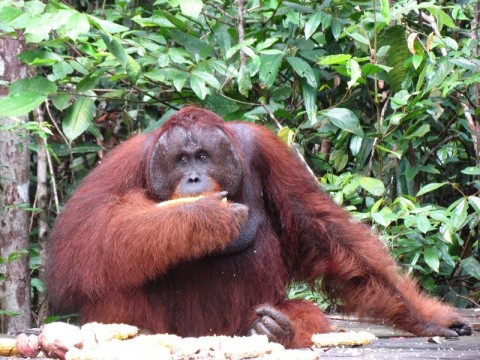 Orangutan (Photo:MI/Dhika Kusuma Winata)
Jakarta: The Presidential Staff Office (KSP) has ensured that the government will protect orangutans during the construction of the Indonesia Capital City Nusantara (IKN) in East Kalimantan.

Main expert at the Presidential Staff Office, Wandy Tuturoong, responded to foreign media reports regarding the impact of development of Indonesia's capital city on the future of orangutans in the development area. Tuturoong said the concerns were understandable.
BERITA TERKAIT

"That is part of public control that must be lauded and answered by the government," Tuturoong noted in a press release here on Thursday.

Tuturoong stated that the study recommended five roadmaps for environmental recovery and improvement. Two of the roadmaps pertain to improving the quality of wildlife, including orangutans, and restoring tropical rain forest ecosystems.

"Hence, it is not just orangutans that must be protected in the IKN area but also other wild animals, such as kuwuk cats, migratory birds, estuarine crocodiles, clouded leopards, langurs, and turtles," he affirmed.

Tuturoong spoke of two recommendations for environmental studies that were included in the capital's master plan. Both are recommended studies at primary activity centers in the east of the capital city and studies at secondary activity centers in the north of the capital, which are directly adjacent to non-developable land. The land is designated as a center for education, innovation, and research activities in the field of biodiversity conservation.

Meanwhile, Tuturoong noted that for the protection and improvement of animal quality, the government will create artificial animal corridors, such as canopies and animal signs, in accordance with Minister of Environment and Forestry Regulation No. 23 of 2019.

The Office of the Presidential Staff will endeavor to make these recommendations an integral part of the planning and development of the capital city. We also hope for the participation of the community and environmental activists, so that the concept of a green and sustainable capital city can actually be realized," he stated.