Public Urged not to Hold Demonstrations during Jokowi's Inauguration 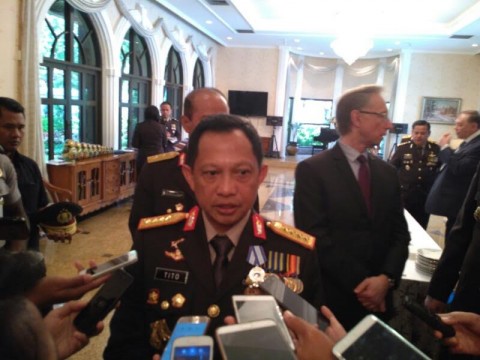 According to the National Police leader, Police are not afraid to disperse demonstrations that can potentially turn violent.
BERITA TERKAIT

"Because of crowd psychology, we appeal that people should not hold demonstrations," Tito said here on Thursday, October 17, 2019.

Tito said the mob mentality could potentially trigger riots. The general had learned from past demonstrations that evolved into riots.

Those demonstrations were smooth during the day. However, the situation deteriorated and developed into a riot in the evening, which resulted in stone-throwing and tire burning. Several public facilities were damaged during the chaos.

"For the sake of this nation, we must not violate the five points. Because we will evaluate the situation. If it is peaceful, safe, we won't ban it," he explained

The five points are based on Article 6 of Law No. 9 in 1998 concerning Freedom of Expression. The five limits are preserving public order, respecting the rights of others, following the rules of the law, heeding ethics and morals, and maintaining national unity.

Tito stressed that the National Police will take a firm stance if the demonstrations begin to be not conducive.

"Our goal is to prevent riots in order to maintain the nation's dignity," he concluded.