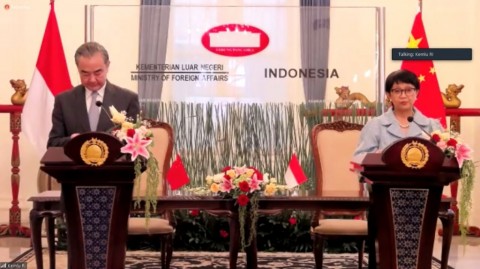 The two foreign ministers witnessed the signing of two agreements during the bilateral meeting, namely MoU on Enhancement of Collaborative Activities between Foreign Ministries and MoM on Pre-Feasibility Study for Lambakan Dam Project in Indonesia.

They also discsussed a number of cooperation between the two countries, including health and economic cooperation.

Since the beginning of the pandemic, Indonesia has enhanced cooperation with several countries, including China, in the provision of diagnostic tools, medicines, and vaccines.

Going forward, Indonesia plans to develop national health resilience, among others through self-reliance in health sector.

"Indonesia is open to cooperate with China and other countries in regard to this plan," Retno stated.

A day earlier, the Chinese foreign minister also had a meeting with Coordinating Minister for Maritime Affairs and Investment in Lake Toba that mainly focused on trade and investment issues.

According to Retno, Indonesia wants to enhance high quality investment cooperation that is environmentally friendly and labor intensive.

"One concrete example is the signing of the feasibility study of Lambakan Dam in East Kalimantan, she stated.

In addition to that, Retno also talked about the issue of protection of Indonesian seafarers who work in Chinese vessels.

Retno conveyed her appreciation to the Chinese Government for the cooperation regarding the issue.

"Lastly, the importance to maintain regional peace and stability. In this regard, I underline the importance to ensure a peaceful and stable South China Sea. To achieve this, there is only one option, all countries must respect and uphold international law, including UNCLOS 1982," she stated.