The Amount of the Regular and Special Hajj Quota for Indonesia 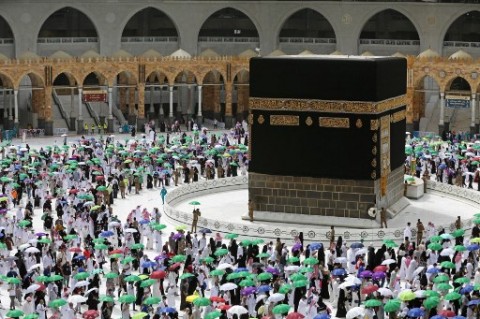 Hajj pilgrimate in Mecca, Saudi Arabia. Photo: AFP
Jakarta: Indonesia has a quota of 100,051 hajj participants this year. The Saudi Arabian government divides as many as 92,825 for regular pilgrims and 7,226 for special pilgrims.

"The quota is given directly by the Government of Saudi Arabia through e-Haj," said Director General of Hajj and Umrah at the Ministry of Religion (Kemenag) Hilman Latief in Jakarta, Wednesday, May 4, 2022.
BERITA TERKAIT

He explained that the provision of regular and special hajj quotas was not carried out as in previous years, through the MoU of the Minister of Hajj and Umrah of Saudi Arabia and the Ministry of Religion. Is given from the Government of Saudi Arabia.

"The distribution of regular and special hajj quotas is carried out following the allocation set by the Saudi Arabian government," he said.

The determination of the hajj quota by the Kingdom of Saudi Arabia was only published in mid-April, due to the pandemic. Hil explained that information regarding the certainty of this year's hajj quota was very limited, because the MoU discussions had been carried out in December of the previous year.

Hilman assessed that Saudi Arabia had based the determination of the hajj quota on the percentage of data on Indonesian pilgrims from the previous year, which did not last at 8 percent. The congregation quota set this year is less than the quota assumption discussed with the Ministry of Religion and the DPR when discussing the Cost of Organizing the Hajj (BPIH) in mid-April 2022.

"But we are still grateful, this year there are Indonesian pilgrims who can go to the Holy Land for the pilgrimage," said Hilman.