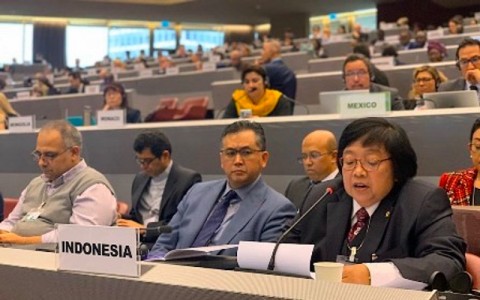 Minister of Environment and Forestry Siti Nurbaya Bakar in Geneva, Switzerland. Photo: KLHK
Jakarta: Indonesia was selected as the host of the Conference of the Parties (COP) 4 of the Minamata Convention in 2021. The forum will be participated by several countries discuss the issue of mercury.

"For Indonesia, it is important to be the host where the complexity of the mercury problem is quite high," said Minister of Environment and Forestry Siti Nurbaya Bakar  in Geneva, Switzerland on Monday, November 25, 2019.
BERITA TERKAIT

Siti said that mercury has been a serious concern of large countries since 2015. Moreover, it is sourced from illegal small-scale gold mines.

President Joko ‘Jokowi’ Widodo also paid attention to Minamata's disease. In 2017, the President ordered the prevention and mitigation of the effects of mercury.

"This is very important in the context of President Jokowi's administration's determination to restore the environment," said Siti.

The NasDem Party politician believes that Indonesia will benefit from hosting the forum. She hopes the event would go well.

"Indonesia will benefit from a variety of international events held in Indonesia," concluded Siti.