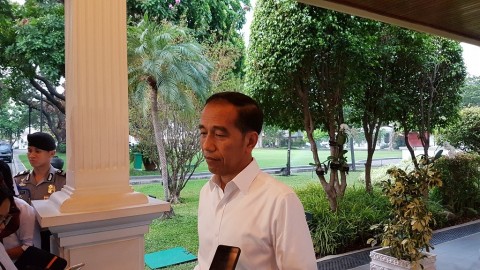 President Joko Widodo (Photo:Medcom.id/Damar Iradat)
Jakarta: President Joko “Jokowi” Widodo requested that the debate over the planned constitutional amendment be stopped. He explained the debate has strayed from its main issue namely the reintroduction of the Guidelines of State Policy (GBHN).

"It's better not to have an amendment," Jokowi told reporters at the Merdeka Palace, Jakarta on Monday, December 21, 2019.
BERITA TERKAIT

Jokowi doubted that the amendment would only focus on the reintroduction of GBHN. He realized that it could broaden to other issues.

His fear is not baseless. The debate around the planned constitutional amendment have also grazed the issues of presidential term limit and electoral system

"Can the next amendment be limited? Can it focus on GBHN? Will it not stray from the main issue? Now that is the current reality," he said.

The MPR plans to amend the 1945 Constitution in order to reintrouce GBHN. However, the debate has started to spread to other topics such as presidential term limit and electoral system.

Another proposal recommends electing the president and vice president through the MPR. This was conveyed by MPR Chair Bambang Soesatyo after meeting Nahdlatul Ulama Chair Said Aqil Siraj at the PBNU Office on Wednesday, November 27, 2019.

The recommendation is based on the results of the Alim Ulama Conference which was held at the Kempek Islamic Boarding School in Cirebon, West Java in 2012.