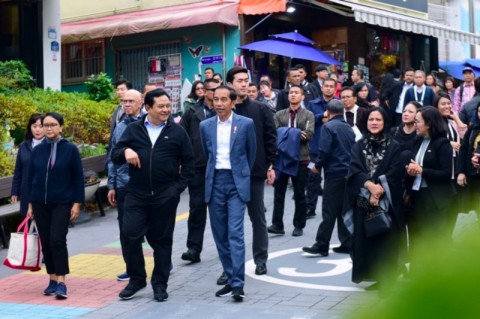 "The first is about the completion of the Comprehensive Economic Partnership negotiations between Indonesia and the Republic of Korea (RoK). Second, the visa-free agreement for diplomatic and official passports holders. The third is a Memorandum of Understating (MoU) on Technical Cooperation on Capital City Relocation and Development," Retno said in a written statement from the Press Bureau, Media, and Information on the Presidential Secretariat received on Monday, 25 November 2019.

The Jokowi-Moon Jae meeting will take place this afternoon. This morning, Jokowi will meet with scientists and researchers from Indonesia. A review of the public service innovation exhibition held at the Busan Exhibition and Convention Center (BEXCO). Foreign Minister Retno said that Indonesia took part in the exhibition.

"Then after that, Mr. President will conduct a working luncheon with selected CEOs from South Korea," she said.

In the evening, President Jokowi and First Lady Iriana were scheduled to attend a dinner at the ASEAN-RoK Summit. The ASEAN-RoK Summit, according to Foreign Minister Retno, is a summit held to commemorate 30 years of ASEAN relations with RoK.

"So, this is a commemorative summit between ASEAN and RoK," Retno said.