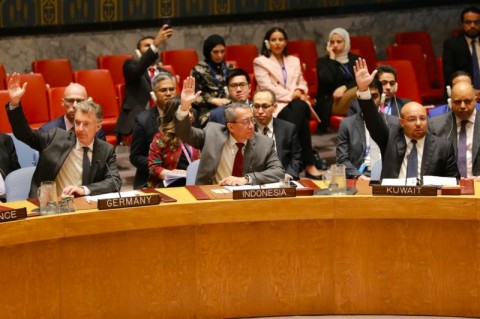 Permanent Representative to the United Nations, Dian Triansyah Djani, in New York, Tuesday on 17 September 2019. Foto: Indonesia Mission in UN
New York: Indonesian diplomacy succeeded in facilitating the agreement of the United Nations Security Council (UNSC) resolution regarding the role of the UN Mission in Afghanistan. The agreement is summarised in UNSC Resolution 2489.

"The resolution was initiated by Indonesia in cooperation with Germany, and includes various United Nations support for the Government and the People of Afghanistan to create peace and encourage development," said Indonesia's Permanent Representative to the United Nations, Dian Triansyah Djani, in New York, Tuesday on 17 September 2019.
BERITA TERKAIT

This Resolution regarding the UN Mission in Afghanistan (UNAMA) had it's mission mandate prolonged by 12 months up until the 17th of September 2020.

In a statement from the New York PTRI received by Medcom.id Wednesday 18 September 2019, Ambassador Djani stressed that this agreement was not easy to achieve. He said Indonesian diplomacy always bridges differences of opinion in the UNSC.

"This consensus was reached due to the level of trust the UNSC has towards Indonesia, especially in supporting the preservation of peace in Afghanistan. This form of support can be seen during the Ulama Trilateral Conference RI-Afghanistan at Bogor in May of 2018," Ambassador Djani added.

All UNSC member nations much appreciates Indonesia and Germany's efforts in maintaining the consensus throughout negotiations. Indonesia's track record has always been the unity of the UNSC as well as saving civilian lives has always been a valuable asset in reaching an agreement regarding the resolution.

This resolution brings a new mandate to UNAMA in supporting the Afghan Government's capacity in the enforcement of human rights, gender equality, women's empowerment, and the protection of children.