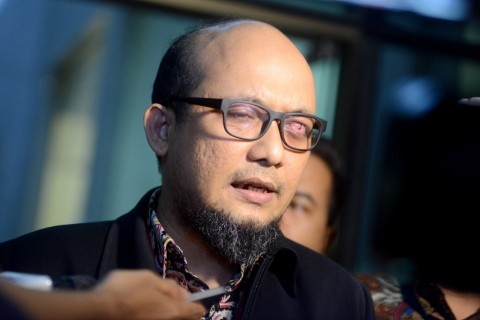 Jakarta: Corruption Eradication Committee (KPK) investigator Novel Baswedan is one of the KPK employees who will receive an honourable discharge this month.

According Novel, his work in eradicating corruption in Indonesia will be recorded in history.
BERITA TERKAIT


"At least history will remember that we did good work," said Novel at KPK Supervisory Board Building in South Jakarta on Wednesday, September 15 th 2021.

Not only that, Novel also believes that the work of other discharged KPK employees will not be forgotten.

Novel admitted that he is sad over the discharge. He revealed that he still wants to eradicate corruption in Indonesia with KPK.

"We worked to eradicate corruption but we were the ones being eradicated," Novel uttered.

Head of KPK Firli Bahuri paid respects to the employees who will receive honourable discharge by September 30.

Firli stressed that they have done so much for KPK.