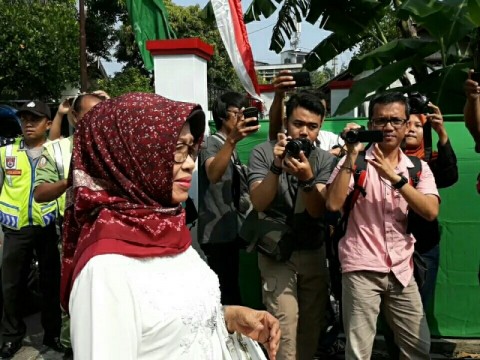 Sujiatmi Notomiharjo (Photo:Medcom.id/Pythag Kurniati)
Bogor: Bogor Deputy Mayor Dedie A. Rachim, on behalf of the city administration and its residents, expressed deepest condolences over the passing away of Sujiatmi Notomiharjo, the beloved mother of President Joko "Jokowi" Widodo.

The demise of Jokowi's mother in Solo, Central Java on Wednesday, March 25, 2020 is a huge loss, both for the president and all residents of Bogor City, Rachim stated in his Whatsapp message that ANTARA received here on Thursday, March 26, 2020.
BERITA TERKAIT

Sujiatmi Notomiharjo, 77, who was battling cancer since the past four years, breathed her last at around 4:45 p.m. local time on Wednesday, March 25, 2020 in her hometown, Solo.

Rachim prayed to the Almighty God that He grants President Jokowi and his kin the patience and steadfastness to endure this difficult time amid the government's ongoing efforts to prevent the spread of covid-19 in Indonesia.

"May President Jokowi and his kin be able to get through this difficult time," he noted.

Several members of Indonesian communities and foreign dignitaries in Jakarta also expressed their deepest condolences over the demise of President Jokowi's mother. (antara)