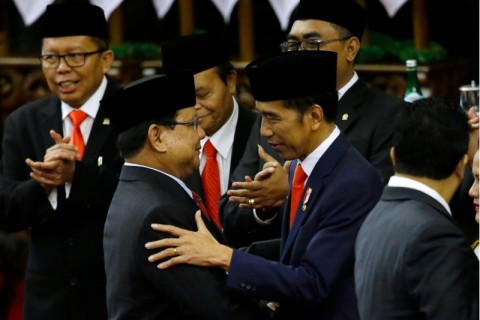 President Joko Widodo with Prabowo at inauguration. Photo: AFP
Jakarta: The Great Indonesia Movement Party (Gerindra) is almost certain to join the government. This was evident from President Joko Widodo's (Jokowi) statement to several people who were invited to the State Palace on Saturday Night.

However, Anzil said, that does not mean there is no opposition party for the next five years. Jokowi hoped that the other three parties would be consistent to stay within opposition ranks.
BERITA TERKAIT

"The National Mandate Party (PAN), the Prosperous Justice Party (PKS) and the Democratic Party (Partai Demokrat) are expected to stay outside the government to maintain balance," Aznil said in a statement from Jokowi.

At dinner with 200 supporters, Jokowi apologized for being forced to cancel the people's prayer event for the inauguration of the president and vice president. According to him, Jokowi was very eager to greet his people but was constrained by such a tight schedule.

Such as receiving guests from inside and outside the country as well as congratulations from other heads of state who called directly. However, Jokowi thanked the people for their trust in continuing his leadership for 2019-2024.

"Jokowi promised to earnestly advance Indonesia and expect his peers to participate in guarding Indonesia's vision going forward," he stressed.

Meeting with representatives, Jokowi was accompanied by his Chief of Staff of the President, Moeldoko.  Jokowi then went around to meet people who congratulated him on his inauguration as president for the 2019-2024 period.