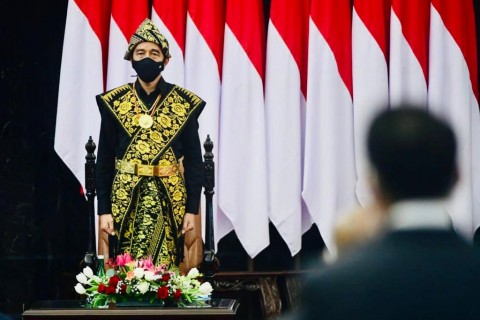 "All of us should wear face masks to protect ourselves, other people, and our beloved nation, the Republic of Indonesia," President Jokowi said, as quoted by Presidential Spokesperson Fadjroel Rachman.
BERITA TERKAIT

On Monday, the former Jakarta governor highlighted the importance of locally-based intervention strategies in a bid to curb the spread of covid-19.

According to the president, the management of clusters handling needs to be improved, especially in eight provinces which have become a priority since two months ago.

Jakarta officially reimposed Large-Scale Social Restrictions (PSBB) on Monday. The policy aims to lower the covid-19 hospitalization rate in the capital of Indonesia. The province previously implemented PSBB measures for around two months from April to June.