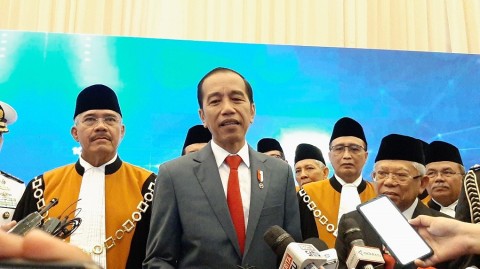 President Joko Widodo (Photo:Medcom.id/Nur Azizah)
Jakarta: President Joko "Jokowi" Widodo and Vice President Ma'ruf Amin have denied rumors that they plan to hold  a cabinet reshuffle in the near future.

"I and the vice president do not have any plan to do it," the former Jakarta governor said at the Jakarta Convention Center (JCC), Senayan, Central Jakarta on Wednesday, February 26, 2020.
BERITA TERKAIT

A number of ministers said that they were not affected by the rumors. Coordinating Minister for Economic Affairs Airlangga Hartarto believes that his colleagues will continue their work.

According to Social Affairs Minister Juliari Batubara, cabinet reshuffle is President Jokowi's prerogative. As a member of the Indonesia Onward Cabinet, his main job is to assist the president.

"The president will objectively review our performance as long as we do our job professionally," Juliari stated.