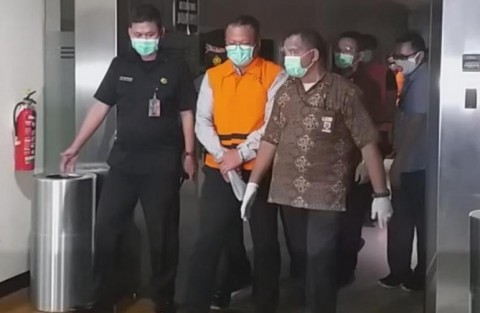 Edhy Prabowo (center) (Photo: Medcom.id/Fachri)
Jakarta: Edhy Prabowo stepped down as Minister of Marine Affairs and Fisheries and Deputy Chairman of Great Indonesia Movement (Gerindra) Party after he was named a suspect of a lobster seed export graft case.

"I will step down as minister and party deputy chairman," said Edhy here on Wednesday evening.
BERITA TERKAIT

Edhy was arrested by the Corruption Eradication Commission (KPK) investigators during a sting operation on Wednesday early morning. He allegedly received at least Rp9.8 billion and US$100 thousand from businessmen.

Besides Edhy, the anti-corruption agency also announced six other suspects, including several staff of Edhy and his wife, Iis Rosita Dewi.

Edhy was appointed as Minister of Marine Affairs and Fisheries in October 2019. He previously served as a member of the House of Representaives (DPR).