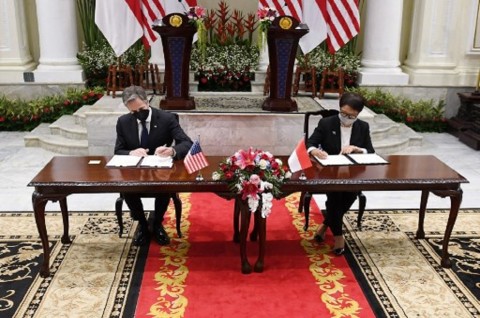 Foreign Minister Retno Marsudi with U.S Secretary of State Antony Blinken at Gedung Pancasila, Jakarta, 14 December 2021: Photo: AFP
Jakarta: Indonesia and the United States (US) have both expressed their desire to strengthen cooperation in various fields, including maritime affairs. Therefore, during the visit of Foreign Minister Antony Blinken, the two countries signed a memorandum of understanding (MoU) on maritime cooperation.

"Today, an extension of the MoU on maritime cooperation was signed which will be valid until 2026," said Foreign Minister Retno Marsudi, Tuesday, December 14, 2021.
BERITA TERKAIT

The signed MoU covers cooperation on maritime security, marine resources, fisheries conservation and management, as well as maritime safety and navigation. This MoU was carried out in order to strengthen cooperation in the security sector.

"Therefore, we have agreed to establish a 2+2 dialogue mechanism between the Ministry of Foreign Affairs and the Ministry of Defense at the senior official level," continued Foreign Minister Retno.

In addition, the US is also committed to increasing economic cooperation with Indonesia. Retno said the two countries have a strong commitment to continue to increase trade and investment cooperation.

The trade figure between the two countries from January to October 2021 reached USD 29.6 billion, an increase of 33.9 percent over the same period last year. Meanwhile, in 2020, US investment in Indonesia will reach USD 749.7 million.

Meanwhile, in 2021 for the January-September 2021 period, it has reached USD 1.3 billion, which means an increase of 73 percent even though it is still in a matter of 9 months.

"Indonesia has also expressed hope that the US will continue to provide GSP facilities," said Foreign Minister Retno.

He added that investment opportunities in Indonesia are very wide open, both in the fields of health, digital and energy transition.

Foreign Minister Retno also said that as a follow-up to the Supply Chain Summit in Glasgow, Indonesia proposed the establishment of a Task Force on Supply Chain.

In the field of development, Indonesia also appreciates the commitment of the United States of America in the Millennium Challenge Corporation (MCC) Compact-2 for sustainable development projects in Indonesia, namely green economy development, digitalization, access to funding and gender equality, and funding for women's MSMEs.