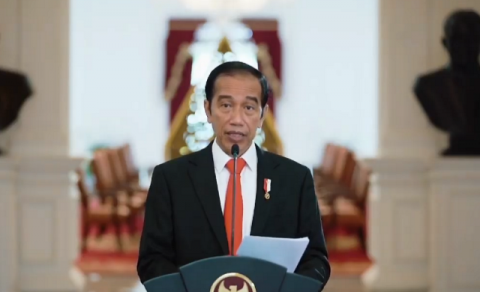 "The BPUM 2021, amounting to Rp15.3 trillion, will be distributed to 12.8 million micro and small business actors," President Jokowi remarked at the Merdeka Palace in Jakarta, Friday.
BERITA TERKAIT


President Jokowi was accompanied by Cooperatives and Small and Medium Enterprises Minister Teten Masduki, albeit still wearing a mask and maintaining a safe distance.

"The country has 12.8 million micro and small business actors. The distribution of assistance starts from today. I am optimistic that this would help to boost our economy," the head of state remarked.

BPUM worth Rp1.2 million will be offered to each micro business actor.

"I know that all of you are facing difficult times right now, am I right? It is very difficult, right? However, it is being felt by everyone. Micro entrepreneurs, small and medium businesses, as well as big entrepreneurs are in a tough situation," the president pointed out.

Jokowi noted several business actors worldwide too were reeling from difficult times during the pandemic.

The distribution of the BPUM phase 2 in 2021 is divided into three periods: July, August, and September 2021.

Some Rp1.2 million will be distributed to micro business actors, who have not received the BPUM and met the specified criteria.


Coordinating Minister for Economic Affairs Airlangga Hartarto made assurance that the stimulus package, provided through the National Economic Recovery (PEN) Program, will facilitate the recovery of Micro, Small, and Medium Enterprises (MSMEs) battered by the COVID-19 pandemic.

“The nation’s economic recovery from the pandemic must be started from the UMKM since this sector has contributed as much as 61 percent to Indonesia’s GDP,” Hartarto noted on his Instagram feed here on Tuesday night.

The government has offered the stimulus package to strengthen MSMEs and cooperatives through interest subsidy, productive aid for micro businesses, and guaranteed fee subsidy.

Moreover, the minister noted that the stimulus package targeted 64.2 million MSMEs impacted by the pandemic, through budget allocation, to the central bank as well as tax incentive for credit restructuring and several other forms of support.

The MSME sector can significantly rise through the application of digital technology that is currently growing at a swift pace in Indonesia, and its value is projected to reach US$124 billion in 2025, according to Hartarto.