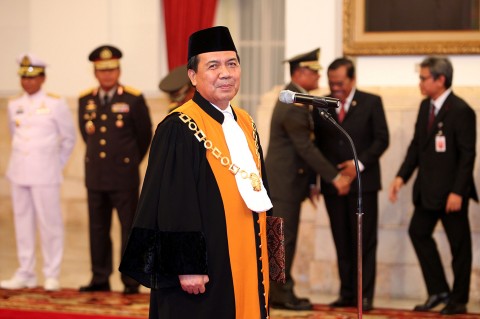 The 65-year-old man will be inaugurated by President Joko "Jokowi" Widodo. (Photo:MI/Panca Syurkani)
Jakarta: Muhammad Syarifuddin has been elected as the Chief Justice  of the Indonesian Supreme Court (MA) for the 2020-2025 period.

The election of the new MA Chief Justice was held at the MA headquarters in Central Jakarta on Monday, April 6, 2020. The election was held in two rounds.
BERITA TERKAIT

Syarifuddin will replace current MA Chief Justice Hatta Ali who will enter retirement age. The 65-year-old man will be inaugurated by President Joko "Jokowi" Widodo in the near future.

In the first round, Syarifuddin only received 22 out of 46 votes. In the next round, the MA deputy chief justice finally secured the majority of votes.