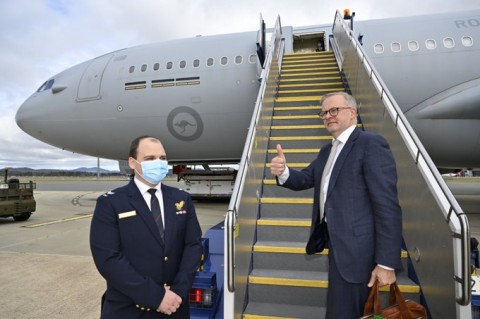 "I am incredibly honoured and humbled to have been sworn in as Australia's 31st Prime Minister. Australians have voted for change. And my Government intends to implement that change in an orderly way," Albanese told a press conference on Monday morning.
BERITA TERKAIT

After the swearing-in ceremony, Albanese will visit Tokyo, Japan for the Quad leaders meeting.

"I received a phone call last night and had a very fruitful and positive conversation, renewing my acquaintance with President Biden. The relationship with the United States is our most important, along with our relationships in the region and our multilateral commitments as well," Albanese stated.

"The meetings that we will have, not just with the United States, but importantly with our hosts in Japan and India are going to be very important, in a good way, to send a message to the world that there's a new Government in Australia and it's a Government that represents a change, in terms of the way that we deal with the world on issues like climate change, but also a continuity in the way that we have respect for democracy and the way that we value our friendships and long-time alliances," Albanese added.

On Saturday, Australia elected its first Labor government in almost a decade.

On the election night, former Prime Minister Scott Morrison conceded the election and announced his resignation as Liberal leader.