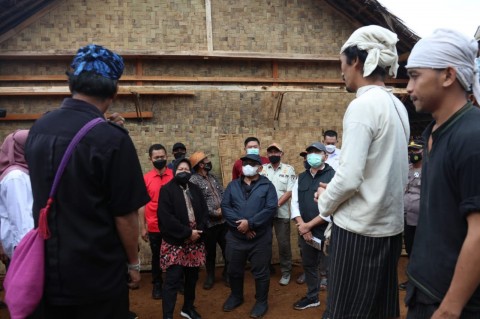 She provided the aid at the request of the head of Kanekes Village, Leuwidamar Sub-district, Jaro Saija, to fix the road to make it more comfortable for visitors to walk upon. As the access road was still a soil pathway, it tended to get slippery during rain, he explained, according to a written statement received here on Friday,
BERITA TERKAIT


"How much does it cost? How long is it (in) meter? I can give you the money now, alright" she told Saija.

Rismaharini then gave Rp100 million in cash for the repair of the road. She also disbursed assistance worth Rp1,001 million.

The assistance was provided for 24 houses, with Rp35 million allotted per house for construction purposes, the statement informed. Thus, the total aid was Rp840 million, it said. Three-month life insurance assistance was also provided, with each beneficiary receiving Rp500 thousand, taking the total to Rp36 million, it added.

Rismaharini also discussed the assistance needed for Badui people and the extent to which their customs allowed for receipt of assistance for raising chickens and catfish or sewing skills.

Jaro Saija told her that animal husbandry was not allowed under their customs, according to the press statement. Though it was possible for local residents to receive livestock assistance, the animals would need to be allowed to live freely and not be reared in the livestock system, he added.

Saija also cited one exception, stating that sewing machine assistance could be given to Saung Kreatif Badui. In response, the minister said she would offer training and sewing machines to empower the indigenous people.

Badui figures, such as Saija and Mursid, expressed their gratitude to the ministry for the assistance.

"Thank you for your help. You have come all the way from Jakarta to the Badui village. Also came to provide assistance," Saija remarked.