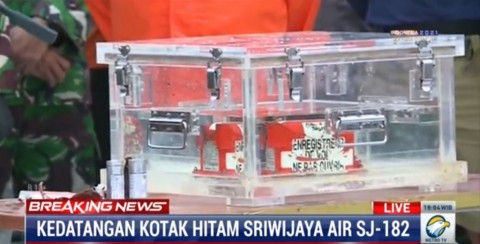 The joint team is still searching for the cockpit voice recorder of the downed plane
Jakarta: Divers found the flight data recorder (FDR) of the downed Sriwijaya Air Flight SJ182 on the third day of search operation on Tuesday.

According to the Indonesian military commander, the joint team is still searching for the location of the cockpit voice recorder, the other part of the black box.

"We still need to find the CVR," Hadi stated.

On Saturday afternoon, the Sriwijaya Air flight went missing en route from Jakarta to Pontianak on the island of Borneo. The Boeing 737-524 aircraft disappeared from radar shortly after take-off from the Soekarno-Hatta International Airport. The airplane reportedly plunged into a steep dive and then crashed into waters off Jakarta.

According to reports, the passenger plane carried 62 people on board, including 12 crew.