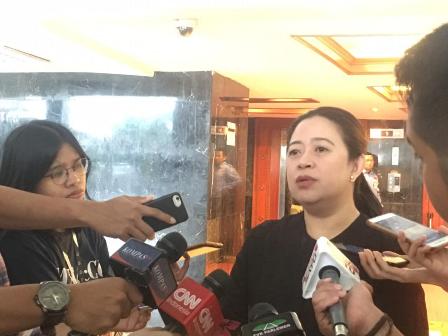 "The initial goal is to only discuss the State Policy Guidelines (GBHN). So the factions in the People’s Consultative Assembly (MPR) must be consistent. Do not stray to other topics," DPR Speaker Puan Maharani told reporters, Jakarta on Wednesday, 4 December 2019.
BERITA TERKAIT

President Joko “Jokowi” Widodo earlier asked the debate concerning the proposed amendment of the 1945 Constitution. He argued that the discussion has strayed to other topics, including presidential term limit and electoral system.

"So, just be orderly and consistent with the initial goal of the propoal, namely discussing the GBHN" she said.

According to Puan, the Indonesian Democratic Party of Struggle (PDI Perjuangan) was one of the parties which initiated the proposal as a pioneer in proposing amendments to the 1945 Constitution. However, PDI perjuangan only wants to amend the 1945 consitution in order to revive GBHN.

"We reiterate again. We only want a limited amendment. We want the MPR has the authority to determine the direction of the state," she stated.

"Indeed, there is already a Long-term development plan (RPJP). But that more reflects the vision and mission of the president that can also change. It is not a guide to national development resulting from deliberations and agreements of all components of the nation," said Puan.