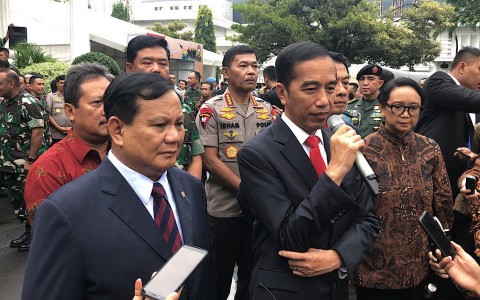 Jokowi emphasized that all levels of the Ministry of Defense should carriy out their duties especially in maintaining the sovereignty of the Republic of Indonesia (NKRI).

"All ranks, of the TNI-Polri (Indonesian Armed Forces and National Police), must work, earnestly in order to strengthen and safeguard the sovereignty of our country Indonesia, to stand at the forefront in maintaining the sovereignty of the Republic of Indonesia," said the former Mayor of Solo.

Jokowi wants national defense system to continue to be strengthened.  The challenge is believed to be even greater in the future.  Most importantly, said Jokowi, Indonesia must be able to understand the entire spectrum of defense.