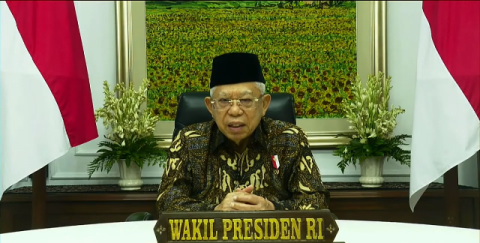 Vice President Ma'ruf Amin (Photo: Setwapres)
Jakarta: Religious plurality in Indonesia is an inevitability that must be grateful for and maintained, according to Vice President Ma’ruf Amin.

According to him, if the diversity is maintained by knowledge and tolerance, it will be an extraordinary gift rarely owned by any other nation in the world.
BERITA TERKAIT

The Vice President also said that tolerance leads people to religious moderation so that everyone can be kept away from religious fanatism, which will lead the people to [religious] fundamentalism, radicalism, and extremism.

He also said that tolerance is not a new concept as it was introduced by Indonesian founding fathers through the state ideology Pancasila and it is also Indonesian nation’s cultural heritage that has lived with the nation since hundreds of years ago.

In addition the Vice President pointed out that to Pancasila is also a standpoint among Indonesia’s diversities including culture, language, religion, tribe, and ethnicity.

Vice President Ma’ruf Amin further said that the construction of houses of worship in one area is one of the measures in implementing the noble values of Pancasila to strengthen tolerance among people, while expressing hope that these places of worship can enable people from different religions to coordinate and collaborate and do not only serve as symbol for tolerance.