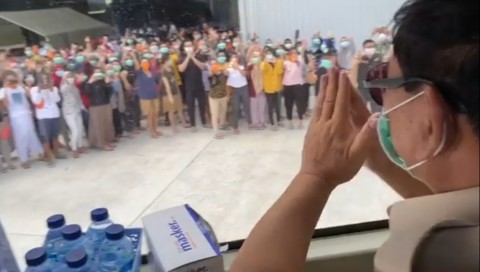 "The defense minister checked the condition of Indonesians who were evacuated from Wuhan some time ago," Prabowo's spokesperson Dahnil Anzar Simanjuntak said here on Wednesday, February 5, 2020.
BERITA TERKAIT

During his visit, Prabowo inspected the military base that is used as the quarantine site. However, he was not allowed to directly met with the 285 Indonesians.

"The regulations are very tight. We cannot directly make contacts," the spokesman explained.

According to Director General of Disease Prevention and Control at the Health Ministry Anung Sugihantono, all 285 Indonesians are in good condition. Besides 243 Indonesians from Hubei, five advanced team members, 24 evacuation team members and 18 Batik Air crew are also being observed at the site.

"Their body temperature is normal. No signs of novel coronavirus," Anung stated.