Kemlu and Kadin Work Together to Strengthen Economic Diplomacy 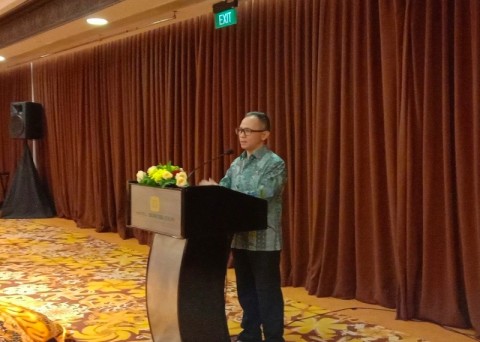 Deputy Foreign Minister Mahendra Siregar. Photo: Medcom.id/Marcheilla Ariesta
Jakarta: The Ministry of Foreign Affairs (Kemlu) and the Indonesian Chamber of Commerce and Industry (Kadin), received ambassadors and Indonesian representative heads who were abroad. The meeting was held to maximize Indonesia's economic diplomacy in all countries.

Deputy Foreign Minister Mahendra Siregar said there would be a signing of a memorandum of understanding (MoU) between Kemlu and Kadin to synergize the strengthening of economic diplomacy.
BERITA TERKAIT

"Foreign Minister Retno Marsudi will sign a cooperation agreement with Pak Rosan (Kadin Chair) to jointly run and strengthen cooperation to achieve what is one of the priorities of the Indonesian government and representatives abroad, namely economic diplomacy," Mahendra said in Welcoming Cocktail Reception in Jakarta on Tuesday 7 January 2020.

During the activity, Mahendra also explained the form of cooperation between the Indonesian Ministry of Foreign Affairs and Chamber of Commerce.  Later, the two parties will compile and formulate programs, commitments and joint activities.  The basis of strengthening cooperation has been carried out by the Ministry of Foreign Affairs, namely by mapping superior products for each representative.

"What is promoted is suitable and needed by the local market," he exclaimed.

However, Indonesia continues to experience growth of 5 percent in 2019. The trade deficit also reduced in the January to November 2019 period, from USD7.6 billion to USD3.1 billion.

Not only that, the investment sector is also expected to increase 15 percent higher than the target of Rp800 trillion.  In the midst of heating up global issues and world challenges, Indonesia's economic performance is still considered good and tends to improve.