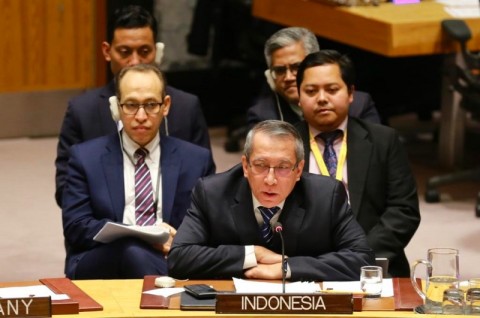 Indonesia Permanent Representative to the United Nations in New York, Dian Triansyah Djani. Photo: PTRI New York
New York: Indonesia condemns Israel's attitude towards its feud with Palestine, which until now has not yet ended. In the UN Security Council meeting in New York, Indonesia considered that Israel showed no good faith in resolving the conflict.

"I find it difficult to understand how we can find peace if the Israeli delegation this morning did not even once answer the various things conveyed by the Palestinian delegation," said Indonesia Permanent Representative to the United Nations in New York, Dian Triansyah Djani, in New York on Tuesday 21 January 2020.

In a statement from the Permanent Mission of the Republic of Indonesia to the United Nations, New York (PTRI) received by Medcom.id, the meeting discussed the situation in the Middle East. UN Security Council members listened to reports from two UN officials, namely Under Secretary General Rosemary DiCarlo and Assistant Secretary General Ursula Mueller.

The two UN officials said the Palestinian-Israeli peace process was hampered by various Israeli actions that were considered to violate international law, such as the construction of illegal settlements and the Gaza Strip blockade.

The Palestinian ambassador to the UN explained that various statistics showed alarming facts in 2019. The Gaza blockade by Israel had caused the area to become almost uninhabitable.

Last year, he added, Israel arrested more than 5,500 Palestinians, including women and children.

He mentioned that the rate of expansion of illegal Israeli settlements last year was so high and unprecedented. The expansion triggered housing demolition and violence against Palestinians in the Gaza Strip. This shows that the real threat of Israeli annexation of the West Bank region is getting stronger.

Indonesia reiterates its support for the fate of the Palestinian people. Indonesian Permanent Representative Dian Triansyah Djani urged Israel to respect international law, stop the construction of illegal settlements in the West Bank, and also stop the blockade of the Gaza Strip.

"The negative trends that have occurred in Palestine will only increase the threat of failed peace efforts in the Middle East region," he stressed.

If it does not end, Dian added, de facto annexation will cause suffering for Palestine. This can make the security and stability of the region difficult to achieve.

Dian closed his statement by illustrating Israel's actions when they forcibly removed 147 olive trees belonging to Palestinian farmers in the village of Al Jaba, Bethlehem on January 1, 2020. The forced removal was considered the same as Israel's efforts to 'remove' the Middle East peace process with its illegal actions.

For Palestinians and many communities in the world, the olive tree symbolizes peace. In the current context, the olive tree can also represent the Two-State Solution, an idea that the global community considers the best solution towards peace between Israel and Palestine.