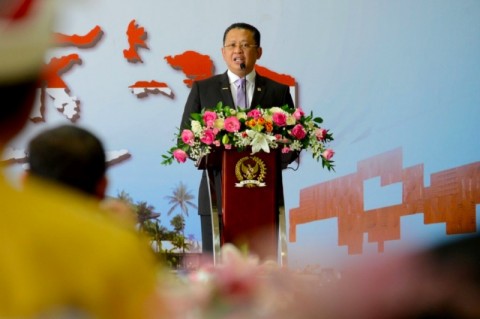 After being verified, five candidates were declared eligible as Golkar's chairperson candidates. They are Airlangga, Bamsoet, Ali Yahya, Ridwan, and Agun.

Before Golkar’s Tenth National Congress was opened, Bamsoet declared he was withdrawing his candidacy. This decision was taken after Bamsoet received input from senior Golkar figures.

"I declare this afternoon that I will not continue my nomination as the General Chairperson of the Golkar Party for the 2019-2024 period," Bamsoet said at the Maritime and Investment Coordinating Ministry, Jakarta on Tuesday, December 3, 2019.

Bamsoet’s withdrawing his candidacy caused Agun Gunandjar to do the same. Agun said that he wanted to maintain the spirit of reconciliation.

"The phenomenon that is happening today is reconciliation. We want the congress to have consolidation-reconciliation," said Agun.

Ali Yahya also withdrew his candidacy, even though he passed verification. The Chairperson of the Golkar’s Tenth National Congress Adies Kadir suspects that Ali is having difficulty fulfilling the requirements.

Practically, only Ridwan Hisjam will become a competitor for Airlangga the incumbent general chairperson. However, Ridwan ensured he would not follow the steps of other candidates who withdrew.

"What is the reason for withdrawing?" said Ridwan.

Ridwan is seen as not having a strong political position to compete with Airlangga as the incumbent candidate. Moreover, Airlangga has claimed that Bamsoet is now one of his supporters.

"Obviously with Pak Bamsoet withdrawing his candidacy, the dynamics will certainly be different because Bamsoet will also provide support to me," Airlangga said after the opening of the Golkar National Congress.