Australia Pays a Captain to Push Back Refugee Vessel to Indonesia 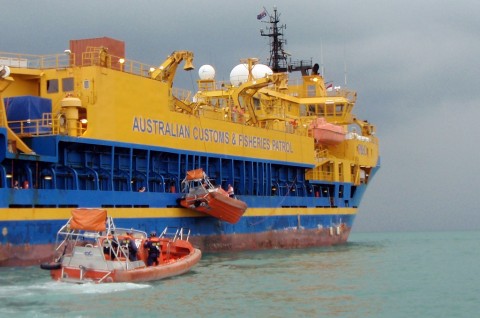 Sri Lankan asylum seekers disembark on a rubber boat from the Australian Customs ship Ocean Viking and transferred to a waiting Indonesian ferry off the island of Bintan near Singapore on November 18, 2009, to be taken to the Indonesian immigration detent
medcom.id, Jakarta: The Australian government again pushed back a vessel containing 65 refugees. The Ministry of Foreign Affairs are still waiting for investigation on the matter.

"There are a vessel captain and crews carrying 65 refugees which was pushed back as they entered Australian waters. The information we received that they were paid USD5,000 per person," the Spokesperson for the Ministry of Foreign Affairs Arrmanatha Nasir said at the Palapa Room, Foreign Ministry, Thursday (6/11/2015).

"Currently, as we confirmed with the security personnel in Kupang, Rote, several crews have been arrested and interrogated. Initially is on the allegation that they have conducted people smuggling, and secondly, they were questioned on whether they have received money from Australia to push back the ship and its passengers to Indonesia," he explained.

Arrmanatha confirmed that the defendants have confessed what have been asked. But the investigation process is still ongoing at the moment.

"Principally, we addressed the issue based on the development of the investigation. If it is true, that is most concerning," he affirmed.

"In the ship, there are pregnant women, there are children. (Australia's action) it's endangering human lives, as they are at the middle of the sea and pushed back to Indonesia," he deliberated.

Arrmanatha insisted that Indonesia stays on the principal as the non-signee of 1951 Refugee Convention, whereas Indonesia applies non-refoulement policy. The policy means Indonesia will not push back a refugee vessel back to sea, after they entered Indonesian waters.

"This is a humanitarian issue. We have to have the empathy to assist fellow men troubled at sea," he explained.

Arrmanatha again added, as related to the contact with Australia on the issue, it will be confirmed following the conclusion of the investigation. However, his party was appalled knowing that government officials have given money to push back a refugee boat to sea. (Eps)(WIL)