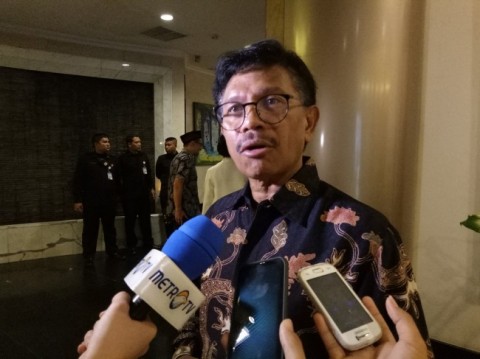 Technological disruption has had a massive impact in the film industry. (Photo: medcom.id/Siti Yona Hukmana)
Jakarta: Minister of Communication and Informatics, Johnny G. Plate, has asked the Indonesian entertainment industry to adapt to digital technology to promptly respond to changes.

"We have seen how changes in television films, serial films for television, and theatrical films have such an extraordinary impact that it necessitates quick adaptation and accurate agility," he elaborated in a press statement released on Thursday.
BERITA TERKAIT

Technological disruption has had a massive impact, including blurring the lines in the film industry, he noted.

Entertainment industry actors must respond to these changes by becoming more skillful in adapting to digital technology, for instance, the minister explained.

Changes have also been felt in production, marketing, and distribution within the entertainment industry, he noted. In addition, consumers' tastes have also changed, he said.

"The impact of this disruption has also driven changes in the marketing style and pattern. Out in the world, the entertainment industry has grown at a significant rate due to this technological disruption," Plate said.

The global valuation of the entertainment industry in 2021 reached US$2 trillion, according to the ministry. Meanwhile, the compound annual growth rate of the industry was pegged at 6.7 percent, he said.

"It is very high. It is the same case in Indonesia," Plate remarked.

The domestic entertainment industry is currently valued at US$10.7 billion, according to the ministry's data. By 2025, this value is estimated to grow to US$15 billion, reflecting a compound annual growth rate of 8.7 percent, the minister said.

The advancement in digital technology should be followed with readiness of digital talents, Plate said. In this regard, the ministry has declared its support for adequate digital talents in the entertainment industry, he added.