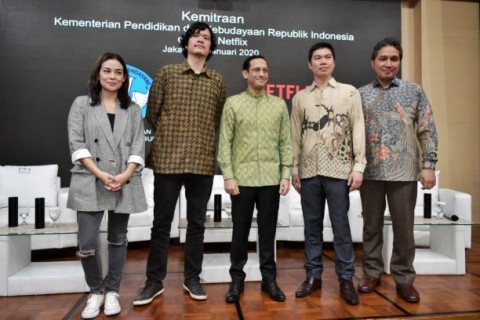 Nadiem hopes that the program can introduce Indonesia as a destination for film production. (Photo:Kemendikbud/BKLM)
Jakarta: Minister of Education and Culture Nadiem Makarim believes, the advancing capabilities of Indonesian filmmakers will have an impact on increasing Indonesia's attractiveness in the eyes of the world. For this reason, the Ministry of Education and Culture has collaborated with Netflix, to increase the capacity of domestic filmmakers.

"By developing the talents we have. Indonesia's appeal will be even greater as a destination for international film production, "explained Nadiem at the Ministry of Education and Culture building, Central Jakarta on Thursday, January 9, 2020.
BERITA TERKAIT

Nadiem hopes that the Script to Screen program as a result of the collaboration between the Ministry of Education and Culture and Netflix, which will send Indonesian filmmakers to Hollywood to gain knowledge, as well as interact with the international film community, can introduce Indonesia as a destination for film production.

"Our hope at the Ministry of Education and Culture is that Indonesia will be the best-selling shooting destination in the world, so that various film makers from all over the world would come to shoot here, "he said.

Nadiem said that the collaboration with Netflix was still in the beginning stages. Even so, Netflix is ready to invest its funds in the amount of USD 1 million. Later there will be various activities besides sending 10 domestic script writers to Hollywood, there will also be a number of workshops and short script concept competitions.

The winner will be financed by the production process reaching USD 600 thousand. With the big theme carried is Pancasila. "Beyond that there are also several workshops that will be conducted by Netflix, from an online safety training program to show how to be responsible for consuming content," he explained.